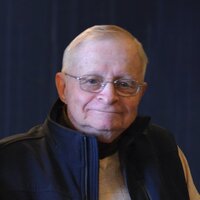 George W. Youngblood, Jr. (“Bill”), age 89 of Boynton Beach, Florida (formerly of Elmira, NY), passed away peacefully in the comfort of his home surrounded by his loving family on May 14, 2022. Bill was born October 30, 1932 in Tully, New York, son of the late George W. Youngblood, Sr. and Helen Youngblood. In addition to his parents, he was predeceased by his sister, Norma Carlton. Bill is survived by his loving wife, Bobbie Youngblood, of 70 years and his children, Deb Brimmer, Sheri Jordan-Borenstein (Bruce), Lori Dunn and Nancy VanGalder; Grandchildren: Kelly (Mike) Booker, Kevin Brimmer, Carly Jordan, Chelsea Jordan, Joe Solometo, Noah Dunn, Gabe Dunn, Joshua VanGalder and Zachary VanGalder; Great grandchildren: Quinn and Theo Booker. Bill was the former owner of Light’s Bake Shop and Coffee Shop in Langdon Plaza, as well as Youngblood’s Bake Shop. He was a Master Baker and expert Cake Decorator for over 40 years. He was a member and former President of the American Baker’s Association. He later worked for Country Home Bakers opening new bakeries and training employees throughout the Southern US and the Caribbean. Bill proudly served in the United States Navy during the Korean War, as well as the National Guard. He was a Navy Airman and served repairing blimps. As an avid sports enthusiast, Bill loved sports and he especially “loved” golf. In his youngers years, he played football, baseball, basketball and bowling in High School, and he actually repeated his senior year in high school, on purpose, in order to play sports for an additional year. He continued to play basketball and coach baseball after school and continued to bowl for 50 plus years. While Bill was enlisted in the Navy, he played on the Navy basketball team and joined their golf league and that is actually where his love for golf began, as again Bill “loved” golf. He played golf for nearly 60 years as well as watching Golf on TV. In his later years, Bill enjoyed fishing and hunting and he participated in the Senior Softball League, Senior Games and a Senior Euchre league. Bill was a member of many clubs including the Elmira Jaycees, the Lions Club, the Dew Birds, the Gyro Club and the Corning Country Club. Bill had many lifelong friends who appreciated his wit and humor along with his eagerness to lend a helping hand. He always showed courage and faced life’s challenges with a smile. Most importantly, Bill was a devoted and loving husband, father and grandfather who blessed many lives and he will be deeply missed. Family and friends are invited to visit Barber Funeral Home on August 6, 2022 from 2pm to 4pm with Funeral services immediately following. A private interment will take place at Woodlawn National Cemetery in Elmira with full military honors. Flowers are welcome or donations to a military charity of your choice, as the VA meant so much to Bill throughout the years.