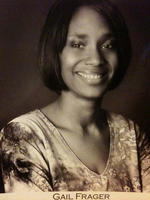 Gail is survived by her identical twin sister Crystal, her father Robert, nephew Aaron & her sister Jin. Gail was an avid lover of the performing arts who studied at the Music & Arts High School in New York City. In her youth and performed in local theater productions throughout New York State. She was a woman of faith who had a love for the world despite her many hardships in life. She was a domestic violence survivor, a community advocate, an artist, and one of the purest souls that we've had the privilege of knowing.