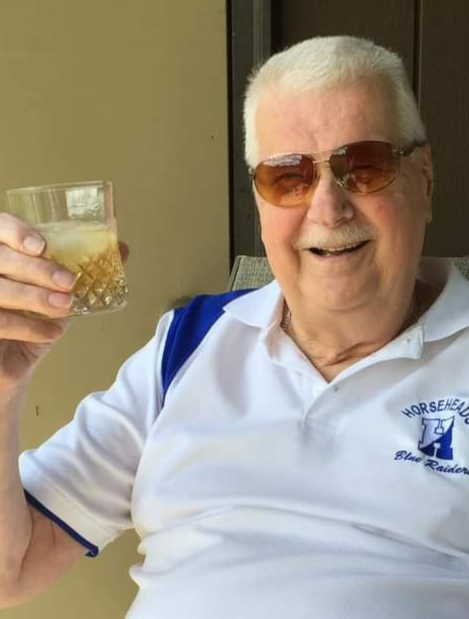 William Samuel "Stick" Kowulich Peacefully passed away early on August 25, 2022. He was born on May 9, 1935, in Brooklyn, NY to William and Elizabeth Simmonds Kowulich. The family moved to his dad's hometown, Elmira Heights in the early 40's. He went to the old Thomas Edison High School where he excelled at basketball, he was 6'6"! His nickname of 'broomstick ', was shortened to Stick, and the legend was born. Years later he was known as "Papa Stick" to the grandchildren. He found a summer job after graduation in 1953 and never left. He retired from MacMillan Bloedel, formerly Hankins Container Co., 43 years later. His four girls went to Horseheads High School and he spent the years cheering them on in their respective sports and activities. He ran the chains for HHS football for 40 years, well after his girls graduated. He kept busy, he coached Babe Ruth for a time, had a catering business for a while, bartended and even managed the HH Elks for a time. Stick was a longtime member of the BPOE Lodge #2297 and a member of the Horseheads Moose. He loved trivia, especially sports trivia. He was the "Phone a Friend "long before the term was coined. He followed the Dodgers since they were in Brooklyn, the Knicks, the Giants and the Rangers. Of course, he had a good knowledge of most other sports as well. We grew up on a one television household and when sports weren't on, it would be The Honeymooners, The Odd couple or Taxi. He loved Jackie Gleason, Art Carney, "Felix Unger" and "Rev. Jim Ignatowski". Over the years we'd rewatch these and laugh as much as the first time. He really lived his life and subscribed to Gleason's adage, Memory is the only money you ever really have, so he made a lot of them. Stick was predeceased by his parents, and son-in-law Troy Williamson. He is survived by his daughters, Pam, Penny (Larry) Fiorello, Valerie (Mark) Mantone and Rebecca Kowulich. Their mother Esther Covell. His grandchildren, Rachael (Garen) Bennett, Stephanie Gorges (Coty Ferris), Mark Samuel and Olivia Mantone, Gianna Fiorello and his greats- Lucas, Levi, Roman and Rarri. (Finally, some boys!) He leaves behind his siblings Barbara, Beverly and Jim (Becky) Kowulich and two nephews, Joe and Mike. Thank you to all the staff of Seneca View and the Med-Surg team at Schuyler Hospital for all you do every day. We appreciate you. Pick up your drinks and give a toast to Stick, Papa Stick, Bill, Mr. K, however you knew him and as Jackie Gleason would say "And Away We Go!" Family and friends are invited to visit the Barber Funeral Home, 413 S. Main St., in Horseheads, NY on Friday, September 2, 2022 from 12pm to 2pm. There will be an informal time of sharing offered at 1:30 pm.